During the second world war a little known battle was fought in North-East Greenland.

Meteorological information proved of vital importance to the fighting forces, especially in the battle of the North Atlantic. The Danish authorities set up a special sledge patrol for the protection of the East Coast of Greenland, a huge territory reaching for hundreds of miles. Its task was first and foremost to make sure no Germans were able to set up meteorological stations in the area.

The action is set off one afternoon, as two member of the sledge patrol come upon some clear evidence of German military presence in one of their huts. This leads to a double race: a) for the Germans to find the two men; the Germans realise their mistake and try to stop the Danes before they can spread the news, b) for the Danes to get the news to the American military authorities as soon as possible.

The ensuing drama results in one death: a Dane is  shot by a German soldier. The next commanding officer of the sledge patrol, Markus Hansen, makes a narrow escape without his protective clothing and has to walk for miles during the night in sub-zero temperatures. But the word is out and the rest of the sledge patrol has been warned and desperately tries to get back to the village in Bay Scoresby on their dog-sledges. On the way, the Germans manage to intercept two of them and take them prisoners. One of them is Hansen.

There are signs of disagreement within the German ranks. The commanding officer, Captain Richter, is loth to engage in an all-out war with the Danes and his hesitancy is criticized by his second in command, a Nazi sympathizer. Richter decides to take Hansen back to the German headquarters himself and to leave the Nazi in charge of the platoon.
The vastness of the area the men have to travel across, either on foot or on dog-sledges, is truly immense. On the way, Hansen and Richter also have to find the time to hunt, whilst always trying to outmanoevre each other. At one point Hansen gets hold of Richter’s rifle, and the tables are turned. He leaves Richter in a tent and sets out on his own. The following day he thinks better of it and returns to pick Richter up as his prisoner-of-war.

The trek over the ice takes 40 days. Hansen and Richter survive various dangers, including an encounter with a hungry polar bear. They get lost in an Arctic storm, they fall into the sea through the ice, get trapped on a floating island of melting ice, but are saved by an Inuit family. They flirt with the daughter, but are offered to share a bed with the wife instead. Prisoner and warden get to know eath other – and get to know themselves as well. In such a hostile environment killing another human being seems totally senseless, even as an act of war. The protection of life becomes the paramount task in hand, served by the will to survive.

On their way across the last glacier, Richter manages to seize the rifle back. He declares this is where they’ll part: Hansen will go alone to Bay Scoresby. As Richter looks for provisions to take along, Hansen jumps on him and they fight desperately over the rifle, rolling onto the sledge – and all begin to slide downhill, men, sledge and the two remaining dogs. Suddenly the icy ground disappears from under Hansen and he falls into a crevasse and breaks one of his legs. It’s now up to Richter to save Hansen’s life – or to leave him there to die.

The remaining members of the sledge patrol reach the German headquarters by an American icebreaker to pick up the rest of the Germans, but they have all left, except for the doctor, a strange man, who lets his presence be known by playing Rossini on an old gramophone behind an iceberg.

Music in these regions can only be a call for peace.

This war story ends with an act of charity and of self-sacrifice. Richter, the prisoner, brings Hansen to Bay Scoresby. He has saved his warden’s life, but once they’re back in civilized society, the Danes don’t have a choice in the matter. The world is at war and Richter will be handed over to the American authorities.

A co-production with M&M Productions, Copenhagen, who will serve as main production company. 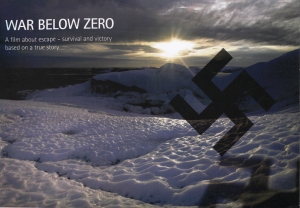